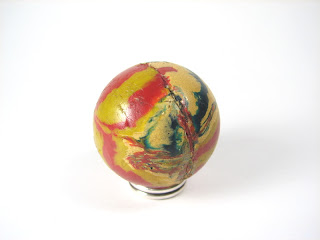 As distinguished from other swirls and cyclone styles, the ribbons and eddies of color here do not originate from a single injection point of origin in the mold but appear to have been administered through an additive process of rolling.  The marbling is similar to the effect of hand-rolling clay or dough of varying colors and adhere more to principles of fluid dynamics.
(Photo Courtesy of Lenore M. Edman, www.evilmadscientist.com.) 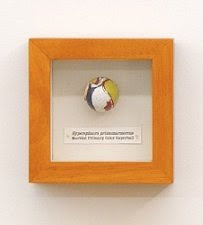 An original specimen box from the series, Requiem for the Super Ball®.
Constructed of found and vintage objects.