"Super Balls ® encouraged wholesome, boyish, childhood-revisited kind of fun. The only thing to fear was the sphere itself. The ball was so resilient and picked up so much reverse spin that it didn't catch easily. After slamming one into a wall you might have to duck or be struck. Black eyes and welts, about the circumference of a Super Ball ® were common to the fad, but were not enough to dampen enthusiasm."

This is a fun excerpt from on websites historical reference on the Super Ball®. 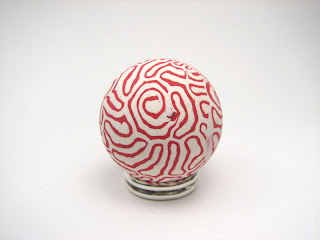 These duotone spheres appear in a variety of colors, set against a white background.  The squiggle pattern undulates around the entire surface and resembles the labyrinthine structure of the grooved brain coral, Diploria labyrinthiformis.

This ball is named in memory of Mike deGruy, the renown filmmaker and marine biologist.  In recognition of the critical role that corals play in the health of the marine ecosystem and in dedication to deGruy's life long commitment to the preservation of the world's oceans and the creatures within it, this specimen will forever bare his name. 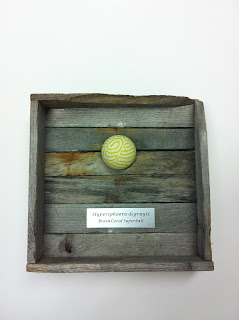 A specimen box created for the ongoing project,
Requiem for the Super Ball®, From the exhibition Super•Ball. 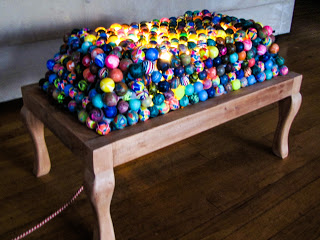 Check out this designer's use of balls for a glowing ottoman.

You can also see here his process.