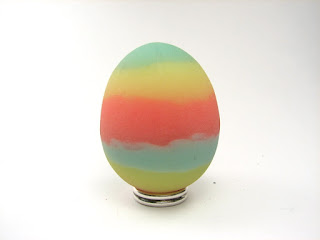 This family of balls - if you can call them that - is one of several non-spherical forms in which you'll find bouncy balls.  These egg shaped oblong objects are made with the same rubbers and production methods as other Hypersphaera,
although these—unlike most—are not cast in molds with two halves.  They are primarily uniform in texture and are either brightly colored in solids or banded with color in the manner of a hand-dipped Easter Egg.  (Photo Courtesy of Lenore M. Edman, www.evilmadscientist.com.) 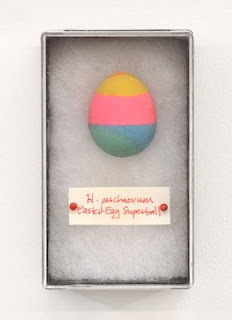 A specimen box form the series, Requiem for the Super Ball®.