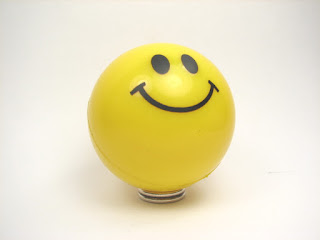 Made in a variety of colors* and densities - ranging from clear to opaque - including the traditional yellow background, H gauisus is commonly characterized by a printed black Smiley (or Happy) Face on a solid background.  A stylized representation of a smiling humanoid face, the graphic as we know it today, with its bright yellow background, dark oval eyes, and creases at the sides of the mouth was invented in 1963 by Harvey Ball, an American commercial artist employed by State Mutual Life Assurance Company of Worcester, Massachusetts.  It was originally intended as a way to boost corporate morale. Though Ball's claim of origination has been disputed - most famously by European Franklin Loufrani, who had the sense to file a copyright - and there are varying forms, his simple graphic is one of the most ubiquitous marks of 20th century illustration. 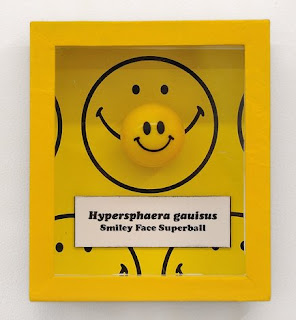 A hand-made specimen box from the exhibition, Requiem for the Super Ball®.
Constructed of reclaimed and found materials. 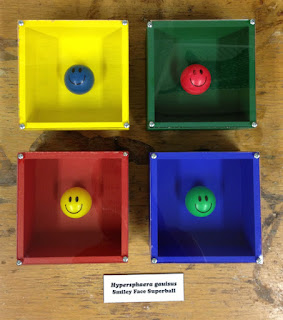 *Hypersphaerae gauisus, 2014
Hand-made specimen boxes by Henry J. Simonds, created for the exhibition, Bounce, produced in collaboration with the Children's Museum of Pittsburgh.