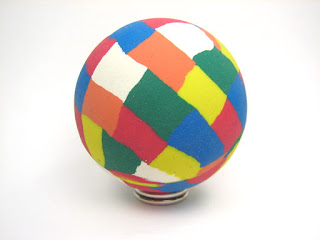 This multi-colored ball features a random pattern of primary and secondary colored diamond and rhomboid shaped blocks intermixed with blocks of white.  No two adjacent blocks are of the same color.  The pattern is reminiscent of the designs featured on the outfits of jesters throughout history and the Harlequin character from commedia del' arte.  The surface design appears to be a "skin" or separate layer, mounted onto the ball's core.  H jesteri can be found with both a textured, matte surface or a shiny, smooth one. 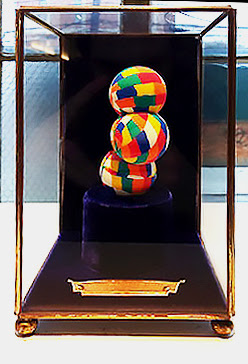 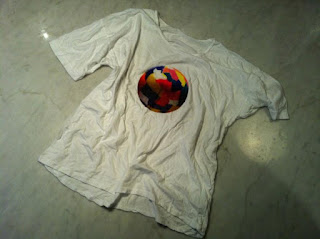 A photograph of a HYPERSPHAERA JESTERI  (Harlequin Superball), SC-F6, is featured on one of the Official I.S.S. T-Shirts available on the Sphaeralogical Society's Etsy on-line shop: ***click here***