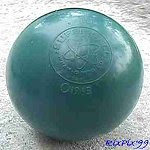 As we aim to help the Sphaeralogical community to classify and identify all of the various types of Super Balls® and there derivative spin-offs, it is important that we recognize the original Original Super Ball® that first appeared on the scene in 1965: Hypersphaera primogenitor. Here is the history of the Original Super Ball® as described on the fan site, Superballs.com.
----
"Wham-O Manufacturing Co., the miracle-working maker of the Hula Hoop ® and Frisbee ® disc, bounced back into the news in 1965 with an explosive knob of rubber called Super Ball.®

Dropped from shoulder level, a high potency Super Ball ® snapped nearly all the way back; thrown down, it could leap over a three-story building; flung into a wall with spin, it kicked back with remarkable reverse English.

The supercharged sphere, about the size and color of a plum, was America's most popular plaything in the summer and fall of 1965. By Christmas, just six months after it was introduced by Wham-O ®, seven million balls had been sold at ninety-eight cents apiece.

Proud father of the bouncing baby ball was a California chemist named Norman Stingley. In his spare time, he compressed a synthetic rubber material under 3,500 pounds of pressure per square inch and created a ball with unprecedented resilience.

Stingley offered it to his employer, Bettis Rubber Company, of Whittier, California, but was turned down. Since the rubber hardpack tended to fall apart quickly, it was feared the product would never be marketable.

But Wham-O ®, a company with a reputation for taking brilliant ideas off the street (the Frisbee ® was freelanced to the firm by a carpenter), agreed to work with Stingley on his idea. For several months they sought a more durable substance and finally concocted a ball that stood up under normal use, although it still lost large chunks when smashed against rough surfaces.

With imperfections whittled away, the Super Ball ® was bounced for glory, a sensation waiting to happen. An old hand at marketing crazes, Wham-O ® gave the bulletized balls a big promotional send-off and they caught on right away. Adolescent boys and girls discovered them first, but grown-ups were soon buying them, too.

Uses were many and varied. Super Balls ® were bounced over rooftops, dribbled by skateboarders, ricocheted around adjoining surfaces and used Superballing the Jacks. The tightly compacted, high friction ball could also be spun into a wall in such a way that it would bounce back at the barrier repeatedly. Accomplished Super Ballplayers would make the self-perpetuating rubber missile hammer itself into a wall four or five times. Long lobbing covered entire city blocks, as the balls ate up the distance with kangaroo-like bounds, and seemed to gather momentum as they skipped along the street. Kids also took up baseball bats and entertained Ruthian fantasies by hitting sub-orbital shots.

Juvenile games were inevitable, but adults thought up ways of using Super Balls ®, too. At the workplace they were vaulted over rows of office desktops, sent hopping down corridors, and dropped onto sidewalks and parking lots from windows several stories high. Competitors tried depositing them into far-off wastebaskets with one strategic bounce.

Presidential aide McGeorge Bundy had five dozen shipped to the White House for the amusement of staffers. At the Pacific Coast Stock Exchange, traders relieved tension by propelling them across the floor.

Super Balls ® encouraged wholesome, boyish, childhood-revisited kind of fun. The only thing to fear was the sphere itself. The ball was so resilient and picked up so much reverse spin that it didn't catch easily. After slamming one into a wall you might have to duck or be struck. Black eyes and welts, about the circumference of a Super Ball ® were common to the fad, but were not enough to dampen enthusiasm.

Wham-O's ® oft-repeated claim was that the ball had 92 percent resiliency - - about three times that of a tennis ball - - and would bounce on for about a minute after being dropped from a short distance.

The synthetic used to make the ball spring eternal was dubbed Zectron ® by Stingley, and there were rumors that it was made from an exotic fruit grown by crossing an East Indian rubber plant with an Outer Mongolian plum tree. A likable, if unlikely story; when Stingley's patent was issued in March 1966, it revealed a less colorful formula. The primary element was polybutadiene, with smaller amounts of sulfur to reinforce the material and serve as a vulcanizing agent. According to the patent, the ball was molded under some one thousand pounds of pressure per square inch at a temperature of about 320 degrees Fahrenheit.

The balls were also red hot in the marketplace and pressure from retailers was intense. Output at Wham-O's ® San Gabriel, California plant and four other factories contracted to turn them out grew to one hundred seventy thousand a day by mid-November.

The appeal lasted well into 1966, although adults and kids eventually let loose of the fad. Meanwhile, there were few original Super Balls ® left for posterity since most were eventually chipped into oblivion.

Yet no one who ever owned a Super Ball ® has forgotten the greatest bouncer of all time. No ball in history ever behaved like the Super Ball ® and none ever sold like it."
----
Original balls are very hard to find these days. Most of them have either been lost or have detiorated and been thrown away. They do appear on-line occasionally, so you may be able to snacth one up and be able to appreciate their genius for yourself. Superballs.com has links to sites that sell these balls as well as other helpful and fascinating information about the ball and its origins. We here at the I.S.S. hope to further enhance peoples' understanding of the history and science of these balls by adding depth to the information and ideas posted on this site and others like it and building a larger community around it. We thank the administrators of Superballs.com for there commitment to the study and promotion of the Super Ball® and hope that we are all successful in continuing to build interest from the community.

The Founders
- - - -
(Updated: 19 Oct. 2020)
In 2013, Chief Sphaeralogist Henry J. Simonds, was given a 1966 Original Super Ball® from an admiring enthusiast.  To honor this and to show the ball's original composition, he created a display box featuring the deconstructed  ball.  It was introduced in the exhibition, Super•Ball, at The Mine Factory in Pittsburgh, Pa, in December of 2013 and featured in 2014/15 at the Children's Museum of Pittsburgh in the show Bounce! 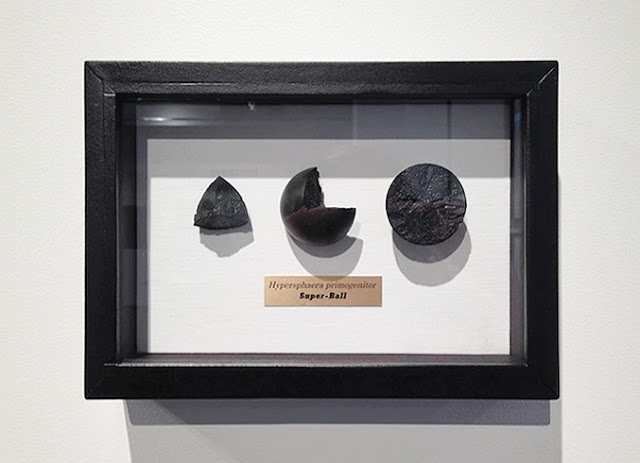